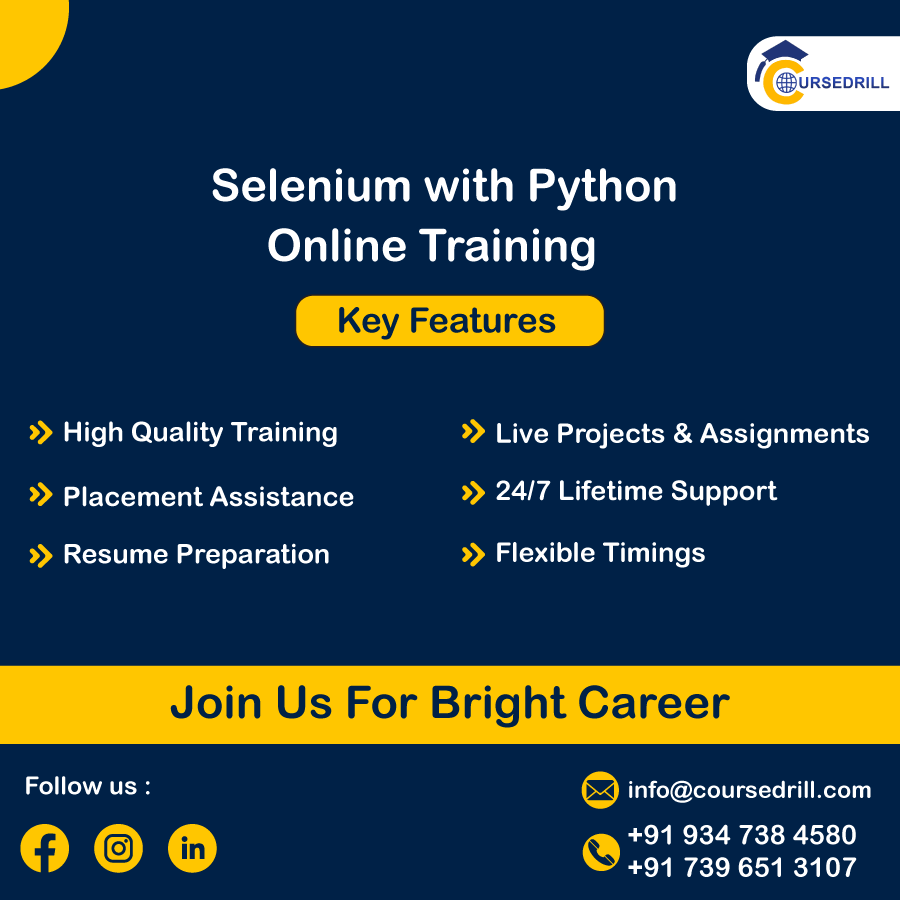 Becoming an industry demanded testing professionals by enrolling into experts designed Selenium with Python training. Our expert trainer will cover all the concepts of Selenium with Python from the basic to advanced level. In this training, you will gain mastery in the areas such as automation framework design, Python programming concepts, Selenium Python API Models, Pyautogui, Selenium web driver, major execution steps, etc. During the Python course, you will be working with two live projects which gives you practical exposure and builds confidence in you. Our Selenium Python class will also help you with your interview preparation process and eliminates roadblocks to get into your dream job. Whether you are a beginner or an experienced candidate you will become an expert in automation testing by joining CourseDrill’s Selenium with Python certification course.

Why should You Learn Python Selenium Course?

CourseDrill offers comprehensive python automation testing training online with industry experts. We have trainers who hold firm experience in testing and programming languages. We strongly believe in our trainers and Python selenium course content which helps us in delivering the best Selenium Python Class. We assure you that by the completion of this selenium python class you will gain all the skills and confidence to handle real-world testing tasks.

CourseDrill offers you a comprehensive Selenium with Python training designed and delivered by industry experts. This python automation testing training online program has included all the elements to make you a professional in test automation by covering end to end concepts. Meanwhile, you will also get a chance to work with two real-time projects and gain hands-on experience. We assure you that you are gonna receive the best Selenium with Python training by joining CourseDrill.

What are the core objectives of Selenium with Python online course?

Following are the areas in which you will gain expertise with this selenium with python online training.

Who should learn Selenium with python?

Following are the professionals who get benefited from adding this skill to their tool kit:

Do you need any special qualifications to learn this Selenium with Python Course?

You need not have any special qualification to learn this selenium with python online training but having knowledge of Python programming language and experience in selenium web-driver configuration will become an added advantage for you.

Yes, we offer customized Selenium with Python corporate training to cater to the unique needs of organizations and help them in transforming their workforce with the latest skills. Our certified trainers will design and deliver course content that fits your unique learning needs.

How much does the Selenium with Python training cost?

Quality never comes cheap! This is a universal fact, but intending to deliver high-quality Selenium with Python online training and certification to all, we offer this course at a very affordable cost. You can get complete cost details by calling or doing WhatsApp at +91-93473 84580 or write to us at [email protected].

What is the Python Selenium Course?

Selenium: Selenium is a popular open-source testing tool used to test applications and platforms on different browsers. It also provides a test domain-specific language and allows to write test in multiple languages which include Java, Python, C#, PHP, Groovy, Perl, Scala and Ruby. Selenium is a powerful testing tool and supports testing on all types of modern web browsers. Selenium has occupied a prominent position in the automation testing world and the number of job opportunities available is also high in this file.

Selenium is an open-source testing tool. Using Python along with the Selenium for testing makes things simple and less verbose. Python API’s simplify the way to connect with the different browsers using Selenium and one can also send commands to different browses irrespective of their design and structure.

Introduction to Python and Pycharm

Learning Objective: This module has been designed to teach you the fundamentals of Python programming language and its relation with the Selenium tool.

Learning Outcome: By the completion of this chapter, you will gain knowledge of the importance and need for Selenium with python, the process to download bindings, Selenium server installation, etc.

Learning Objective: This module will help you get an overview of the core concepts of the Python programming language.

Learning Outcome: By the end of this module you will gain mastery in all the core concepts of Python programming language.

Learning Objective: Selenium WebDriver is a group of Open-source APIs which helps in automating web application testing. This module will help you learn all the fundamental concepts of Selenium web-driver.

Learning Outcome: By the completion of this chapter you will gain knowledge of the most essential concept web driver, its installation process and various concepts associated with it.

Learning Objective: This chapter has been designed to teach you how to use the navigation to interact with pages and elements such as buttons, input text, and dropdowns.

Learning Outcome: By the completion of this module you will gain a complete understanding of Navigation concert and its components.

Learning Objective:  This chapter has been designed to teach you how to use different strategies to locate various elements on a page.

Learning Objective: By the completion of this module, you gain hands-on experience in handling all types of tasks associated with locating elements.

Learning Objective:  This chapter will teach you about all the page objects associated with Selenium with Python training.

Learning Outcome: After finishing this chapter you will gain hands-on exposure in handling the various page objects tasks in Selenium with python.

Learning Objective: This chapter covers all the internal as well as external concepts associated with Web-Drier APIs.

Learning Outcome: Upon the successful completion of this module you will gain practical knowledge of the above-stated concepts.

Qualifying Selenium with Python certification demonstrates that you have acquired all the essential skills to handle the complex tasks of Selenium test automation. Companies out there are offering excellent career opportunities with nice packages for the certified Selenium with Python professionals.

With an aim to deliver practical python with selenium course we have included two live pythons with selenium projects in this training program. Our expert trainers will help you implement real-time live projects during the training which gives you hands-on exposure.

FAQs On Selenium with Python Training

What are the different modes of training offered by CourseDrill?

With an aim to make the learning process simple and flexible, CourseDrill offers two different modes of training which are Instructor-led training and Self-paced training. Apart from this CourseDrill also offers corporate training to the organizations across the world for updating their workforce on the latest technologies.

Do I get job assistance from the CourseDrill?

Yes, upon the successful completion of the course you will get all the assistance required to get into your dream job from our placement department. CourseDrill has partnered with 1000+ companies all around the globe and we share your resume with all these companies for exposing you to the right opportunities. Apart from this, you will also receive extra benefits from the expert team which includes interview preparation, resume building, etc.

What are the projects included as a part of Selenium with Python course?

At CourseDrill we follow a practical approach in designing all the online courses.  Each course consists of two latest and easy to understand projects. Working with projects during the training period will help you apply your theoretical knowledge into real-time applications. This process enhances your knowledge and skill-set to handle real-world projects.

Can I pay the course fee in instalments for learning Selenium with Python?

Yes! With an aim to eliminate the time barrier for learning we have created high-quality self-paced Selenium with Python training videos. You can learn Selenium with Python whenever you find free time and if you come across any doubts or questions our live support system will help you in resolving them.

Can I attend the Selenium with Python demo session before joining the course?

Yes, CourseDrill offers you an option to attend the demo. If you are not satisfied with a trainer we will arrange a demo with another Selenium with Python trainer.

Can I get a job guarantee assistance from CourseDrill?

No! Our job assistance program has been designed only to help you with the potential job opportunities that suit your profile. The hiring process completely depends on your performance during the interview and companies requirements.

Do I get any discount on the Selenium with Python training?

Yes, each course offered by CourseDrill is associated with some specific discounts. When you make an enquiry for a course our coordinator will explain to you with a complete course fee structure along with discounts.

Olivia

Read More
The Snowflake course was completely industry-specific and the explanation was pretty well. I would say Surya is one of the best trainers, he helped a lot in learning Snowflake database training.

Mason

Read More
The whole training went very well and got a bit delayed in completion. The Snowflake course was interactive and hands-on assignments helped me to practice daily. I had zero knowledge of SQL but the trainer helped me in my learning process.